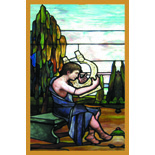 In May of 2013 I woke up with a passion (actually a burden.) God answered my yearlong prayer for a “portable ministry.” I felt compelled to say yes to a request made 25 years earlier by author Thomas Seller. He wanted me to market, Psalm Poems, a translation of all 150 psalms from Hebrew into English rhyming poems.

I tried to call him but we had not kept in contact over the years. I finally discovered he had died 18 years ago. In searching for his copyright, which would have passed to his wife, I found out she died 11 years ago. Since they had no children, and their siblings were also deceased, location of the copyright was a mystery.

God led me step by step, clue by clue, until I received copyright permission. I found Mrs. Seller’s funeral home, who told me she had 3 personal representatives: a friend, an attorney, and a trustee. For confidentiality reasons they could not give me names, but were willing to pass my letters on to them. Only the friend responded.

I really wanted to find the trustee, thinking that he possibly held the key to the Trust which possibly held the copyright. The friend helped me find him, but he had left the bank, didn’t remember details, had no paperwork, and didn’t want to be involved. Dead end.

Friend also gave me name and contact information for another set of friends who have been so helpful. They signed an Affidavit stating they were close friends of Mr. Seller for 50 years and know he would want me to re-publish his works. They shared photos and stories and even voice recordings of Thomas reading his poems. They were aware of the Trust, and thought if I made a donation to mission organizations who should have benefited from sale of copyright, that I would, for all intents and purposes, have “purchased” the copyright.

Both a literary agent and a publisher said the affidavit and donation wouldn’t be sufficient. I needed something more “official.”

I resumed the search for attorney. Michigan Bar Association gave me a new address for him at an assisted living complex. Facility told me he had “transferred out” a few months ago. So I called 12 local branches of the same assisted living facility. Some told me he wasn’t there. Others wouldn’t answer the question. I had to send a letter to Attorney at their address and wait for it to be returned as undeliverable.

A disturbing thought hounded me. Was “transferred out” code for “he died”? Checked with the coroner who didn’t have any record of his death, but records weren’t updated for last couple months. I didn’t want to wait for confirmation.

I thought perhaps he needed more care than the assisted living could provide. So I called 35 nursing homes in the area. Response was similar to the other facilities: some answered my question but for some I needed to send a letter and wait for it to be returned.

It felt like God was leading me on a wild goose chase. Had I misunderstood His calling? Was I not to pursue publication?

When all my leads were exhausted, I returned to the phone book. I looked for people with the same last name as attorney, possible relatives. I found someone who, according to the online profile, may have been his son. So I wrote him, explaining the reason I wanted to talk to the attorney and outlining the lengths I had gone through to find him.

Son called a couple days later, saying my efforts impressed him (hurrah for wild goose chases!) Yes, he was Attorney’s son. Yes, his father was still living at age 93. He had practiced law until age 87, then closed the office and shredded files. But he was in full possession of his mind and memories. He was to have dinner with him that evening and would pass on my letter. In the meantime, he gave me contact information.

I called the Attorney the next day, explained my situation, and asked for his help. He remembered Thomas Seller and his wife, sharing details as if to convince me his memory was intact. He remembered the Trust he had drawn up and agreed Trustee should have sold the rights, but probably overlooked that “invisible” asset.

He also agreed with Seller’s friends that since I had specifically donated to the mission organizations that should have benefited from copyright sale, it was a de facto purchase. He signed the transfer of copyright over to me as Seller’s former agent and representative of the estate.

Now, on the 40th anniversary of Seller’s original self-published work, I am pleased to have preserved his translation of the psalms for future generations. Very few people have translated all 150 psalms into poetry, and to do it in rhyming verse is even more rare. God’s Song contains only 70 of the psalms, but perhaps some day another volume can be published with the remaining ones.

By the way, Thomas Seller also wrote Have You Seen Him?, a book of over 100 poems based on Old and New Testament passages. I also own that copyright and plan to publish them in magazine articles.