History of the Book 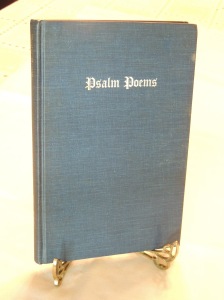 The original book with these psalm-poems was called Psalm Poems. I think it’s a perfect name. Thomas Seller typed it on his typewriter and friends edited it for him. Can you imagine the labor-intensive work it must have been without a computer? The printing company that produced it was not computerized at that time, and no records exist of the number of copies that were made. I think it was probably less than 100.

Seller self-published in 1974. I don’t know why he chose to do it himself instead of presenting the work to a traditional publisher. At that time he was 72 years old and had exposure to limited markets that would sell it for him.

Now, forty years later, I also chose to self-publish. The industry has changed a lot since 1974 and this seemed the most expedient way to do it.

But it was not possible to present the book exactly as he wrote it. (I know, Matthew 19:26 says that with God all things are possible.) Just to include all 150 psalms, without the expository notes he wrote or the “Your Song” portion, would have priced the book out of reach of many. I wouldn’t even pay that much, and I love this book!

So, after typing all 150 psalms into my computer and writing all 150 “Your Song” responses, I made the difficult choice to reduce the book size. How do you tell God some of His psalms just aren’t going to be included? What criteria would I use for choosing? Was I making a mistake?

I hope you agree that the psalms chosen are among your favorites. Some, like the 23rd and 51st and 139th Psalm had to be included. Where would we be without them? I tried to include an assortment with themes of praise and lament, because the Psalms cover all emotions. Some had especially good rhyming pattern and deserved to be included. And frankly, I added some because I liked the “Your Song” response activity.

Will there be a Volume II with the rest of the Psalms? Probably not. Then again, “With God all things are possible.”